Thanks so much! Hope you are doing well! I am soooo enjoying Swayze! She is getting the hang of the crate and going outside. She is so sweet!

“Penny” arrived at BWI on time–safe and sound, and was delivered to us in less than 20 minutes after the plane landed! Penny is a sweet, sweet pup and we are tickled to death with her! I am typing this email with one hand and holding her with the other! I can’t hold her enough! She loves to be held and I don’t think there was a place on Katlyn’s or my face that Penny hasn’t licked. She is a “Cuddler” AND a “Licker/Kisser”!

Here is a picture of Bonnie Blue. I thought you might like an update on her. As you can tell she is beautiful and very smart. We have been taking classes for last 4 weeks. She is doing very well. She is 6 1/2 lbs. Anytime I take her to Petsmart someone will want to know where I got her. They love her color and personality. Thank you again.

Well, this little guy never ceases to make us smile! As you can see, he now resembles his personality. Cracks me up! He is really a character and has so much personality! He and Luey are best friends and are a constant source of joy and entertainment. Luey likes to play super hero when they are with other big dogs and he is so patient and nurturing. It’s another story though, when they play. Barkley is as much an alpha, as he is sweet and laid-back. But either way, we’d take 4 more of these if we could! Thanks so much for bringing these wonderful guys into our lives. :-). He is close to 8 lbs and I think he’s going to stay little as you predicted. Great big personality in a little package! I’ll forward a few more pics and keep you posted. Thanks again!

Kristoffer named his puppy Cowboy. And, yes, he has a little cowboy hat! Here are a few pictures from my phone. I have the cutest video of Cowboy chasing Kristoffer in the backyard. They are bonding very well. He loves everyone, but his whole body wiggles and lights up when he sees Kristoffer. So precious!! He went to see the Vet today. The Vet said he is an awesome puppy. We agree! Anyway, I just wanted to give you a quick update to let you know we made it home and all is well for now!

Thanks for the pictures!

My husband bought one of your puppies this past Friday, and we absolutely LOVE him! I am starting a “baby book” for him. Thank you so much for sending the pictures, Anita! We will cherish them forever!

Just wanted you to know that Tucker is doing fine. I took him to the vet on Monday after I picked him up on Saturday. He checked out fine. He’s done great in his crate from the first night. No whining as long as he knew I was right there with him. He’s very friendly to everyone we meet. I can’t walk him in my neighborhood without people wanting to pet him. The housetraining has gone well. He’s such a smart and lovable little dog. He’s very good with my grandchildren and with everyone he meets and he’s not afraid of anything, to include the vacuum cleaner. My neighbors on both sides have volunteered to babysit if I ever need it. Will keep you posted.

We are still so delighted with our boys from your July, 2008 litter. They are part of our family and add so much love and entertainment to our lives. I bought one for my two granddaughters and one for us, but they travel between houses as a team most of the time. I only wish we had more of them. We refer to the granddaughters as “the girls” and Max and Freeway are “the boys”. Thank you for raising such precious pups!

“Shaun” is doing great. The vet’s office loves him and were not only impressed with him but also the food, vet care, and records you kept on him. Im continuing with the Diamond brand food. He’s adjusted well to my home and his crate. He’s adorable and everyone that meets him falls in love 🙂

Charlie is so at home with us! We have had a great day with him and he’s settling right in. He is so comfortable and loving spending time with my children! He slept all the way home in the car and is doing great with pottying! I’ll send more pics soon! 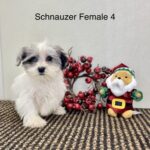